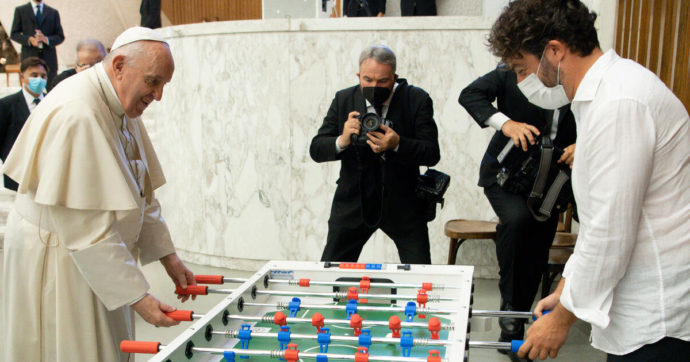 Socccer-loving Pope Francis gets a new toy: a foosball table.

VATICAN CITY — Pope Francis has received dozens of soccer jerseys and game balls during his eight-year pontificate but he got a new football-themed toy on Wednesday: his very own foosball table.

Francis played a round on the table that was presented to him at the end of his general audience by representatives of a Tuscany-based table football association, Sport Toscana Calcio Balilla in Altopascio.

The mayor of Altopascio, Sara D’Ambrosio, wrote on Facebook that the table was designed to be inclusive and work well for people with physical disabilities to encourage their participation in sport.

The Argentine-born pope is a well-known lover of soccer and his beloved San Lorenzo soccer club in Buenos Aires. He has long promoted sport as a way to promote solidarity and inclusion, especially for young people.